A Life Hardened by the Streets

Recently I’ve felt my heart breaking little by little every day. I have seen firsthand the effects that living on the streets has on a child’s life. And it sucks.

A couple of months ago I met a boy who was smart, sweet and fun. He enjoyed life and those around him. He had one of the sweetest smiles around. He enjoyed helping out and cleaning up. He was playful. His laugh was contagious.

He had not been enrolled in school for a little while and had just become a street child. He wasn’t addicted to rugby but was still living on the streets. In an attempt to keep him from missing out on an education and try to get him back off the streets as soon as possible we brought him into our group of kids. 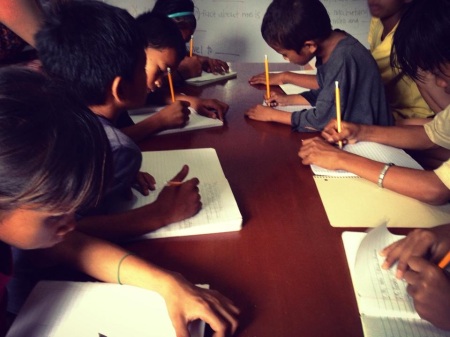 He began attending school every day. He hung out with us at night in Divisoria. He started coming to church with us on Sundays. He was full of joy and laughter.

I have seen a young boy go from walking into school freely giving out hugs to a kid who walks in and sits down by himself.

I have seen a boy who used to never spend time with other kids who did rugby turn into a child with rugby on the back of his shirt.

I have watched a kid change from wanting to play with others nicely to a boy who argues alot.

I have seen a child full of smiles and laughter transform into a boy who sits alone in anger.

I have watched how the streets hardens a life. I have seen how a young boy full of life and laughter can so easily be transformed into someone who shuts down and becomes angry so quickly. I have seen how the streets turns a loving child into someone who has to defend and fend for themselves, causing them to lose trust in others who truly care about them.

Right now, because I can’t give him these things, I ask for you to pray with me. Pray he will see there are other options in life than just living on the streets. Pray he will want more for himself. Pray he will trust us and know we want good for him. Pray he will not become addicted to rugby. Pray he will begin to laugh and smile and love again. Pray he will play as kids should play. Pray.

One thought on “A Life Hardened by the Streets”